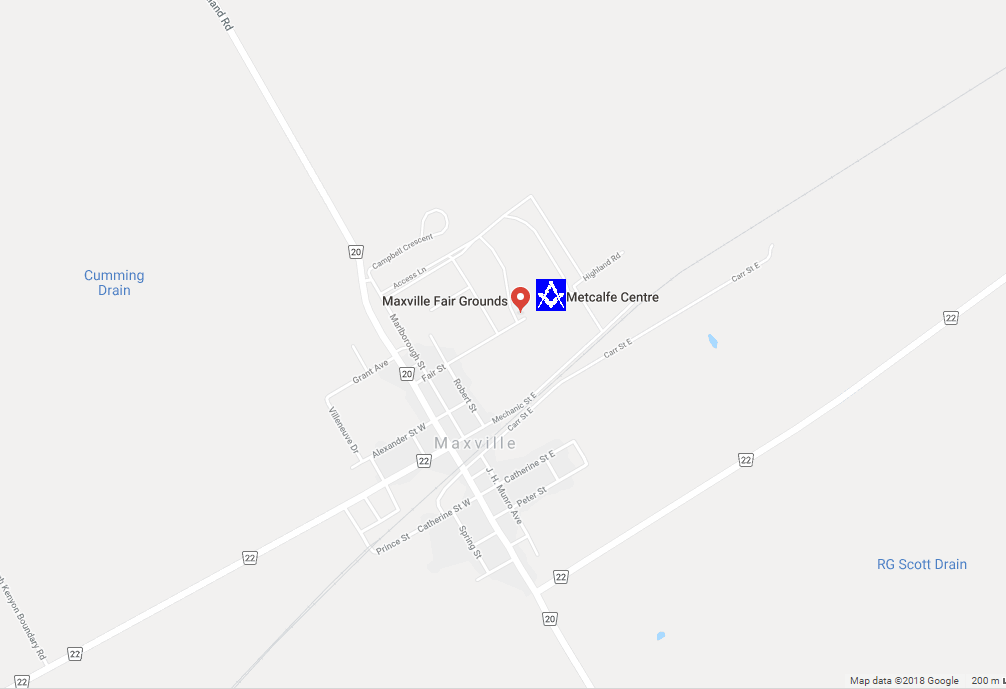 As Masonic Lodges predate this country, its origins dating back to the middle ages, so does this Lodge predate the incorporation of the Maxville itself.

A Masonic Lodge is not a service club but rather more a fraternal organization – its main objective is to improve the morals and character of its members.  Its purpose is to teach morality, encourage charity, and practice worldwide brotherly love.  Its membership is open to people of all religions, creeds, and ethnic and racial origins.

A meeting for the purpose of forming a Freemason’s Lodge in Maxville was held on January 31, 1887.  Minutes record that the meeting agreed to ask Grand Lodge for dispensation to organize a Lodge, also asking for a warrant of Constitution, and to ask Lancaster Lodge No. 207, Cornwall Lodge No. 125 and Plantagenet Lodge No. 186 for a recommendation.

The Lodge held its first regular meeting in a building known as Boyd’s Warehouse.  This building was located near the present site of the Via Rail Station.  The Lodge met in the Maxville Public Hall from 1887 to 1921.  The fire that decimated Maxville’s Main Street also destroyed the Hall and with it, the Lodge Room containing all the Masonic regalia.

Temporary accommodation was arranged in the Women’s Tote Hall and, on August 6, 1921 the Lodge started to meet in the Independent Order of Odd Fellows Hall (the rental was $2.00 per night).  The first meeting in the McKay Block at 1 Mechanic Street was held November 9, 1923 and the Lodge subsequently bought the building on March 17, 1960.

The Glengarry News reported the dedication of the new hall on June 6, 1924.  It stated that:

“As anticipated the Dedication of the new Masonic Hall, here in the McKay Block on Friday night, 30th May, proved to be an outstanding event in Masonic History in Maxville and District…[it] was witnessed by the largest Masonic gathering ever convened in Maxville.”

The Lodge celebrated its 50th anniversary in equally large fashion.  The festivities were held in the Maxville United Church Hall.  It was at this time that the Senior and Junior Warden chairs were donated by the MacLean and Stewart families both of whom had relatives who were charter members of the Lodge.  There were over 140 Masons present for the occasion. (Glengarry News, June 18, 1937).

The Lodge celebrated its 100th anniversary in 1987.  A special meeting was held which saw the Lodge room filled to capacity on May 28, 1987, and a banquet immediately followed.  As well, the Lodge had a memorial service at the Gordon Church in St. Elmo on September 27, 1987, which was equally well attended.

Having reached its centennial, the Grand Lodge granted Maxville Lodge the right to have gold-coloured trim on its members’ aprons as well as on the Lodge regalia.

For economic reasons the Lodge sold the McKay Block in 2008 and continued to meet there until 2009.  With the support of Plantagenet Lodge No. 186, Maxville Lodge held several meetings at their Lodge in Riceville until the new Lodge room in the Metcalfe Centre in Maxville was completed.  The first regular meeting in the new Lodge room took place on March 17, 2010, coincidently, 50 years to the day from the date of purchase of the building on Mechanic Street.

The new Lodge room was dedicated by the M.W. Bro. Raymond S.J. Daniels, Grand Master, and a team of Grand Lodge Officers on October 15, 2010.  The ceremony was followed by a splendid banquet attended by over 170 Masons and guests and included entertainment by Highland dancers and musicians.

In conjunction with the dedication ceremony, it was decided to change the name of the Lodge to Glengarry Highland Lodge No. 418.  This new name will better represent a larger area of Eastern District and the Scottish heritage of this historic Lodge.