John Cameron Yourt, generally known as Jack, was born near Cobden, Ontario and raised in Arnprior. He worked as a lineman with Ontario Hydro for 36 years, settling in Winchester where he has lived since 1969. He is married to L inda Poole and has a daughter, Anne Yourt, who lives in Toronto with husband Robin Dwarka and two daughters, Olivia and Marlo. Jack also has a stepson, Sean Patterson, who lives in Thunder Bay with wife Heather Ferguson and daughter, Fiona. Sean is also a mason.       Jack retired in 1993 and has since devoted his time to his favourite hobby, piping. He began playing pipes at age 15 with the Lanark & Renfrew Scottish Regiment, played with the Ottawa Police Service Pipe Band for 24 years and is currently a piper with the RCMP Pipes & Drums, since the year 2000.

Above: Bro. Yourt with the Grand Master ,M.W.Bro.Donald Campbell at the dedication of North Dundas Lodge No 320

Jack also teaches piping and is extensively involved in the local piping community. He 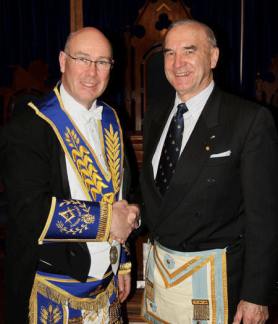 was treasurer to the Ottawa Branch of the Pipers and Pipe Band Society of Ontario for 24 years and was the designate piper to the Ottawa Chapter of the Canadian Club for 15 years.

Jack has been involved with the Glengarry Highland Games in Maxville, Ontario for over 20 years and chairs the Piobaireachd Society Gold Medal (Canada) contest, which is sponsored annually by the Games. Jack served as President of the Games in 2012 and 2013.

My interest in masonry began at an early age. My uncle, P. J. Cameron, wore a small masonic pin, which spawned my interest. I too wanted to wear that same pin. Peter Cameron listed as #386 Madawaska Lodge, June 24, 1921. I have his book of “The Work” 1912, which I am donating to Madawaska Lodge for their 150th anniversary in 2017-18.

It should be noted that a dispensation was granted by Most Worshipful Brother W. M. Wilson, Grand Master, to institute a Masonic Lodge at Arnprior, until the meeting of Grand Lodge, when a warrant was issued in due course. The dispensation was dated December 18, 1867 to Madawaska Lodge #196, Grand Registry of Canada. The first lodge meeting was February 9, 1868 in Eddy’s Hall, Harrington Street in Arnprior, ON. I am honoured to be a recipient of the William Mercer Wilson award 149 years later.

Some of my Masonic and Shriner memories are as follows:

Started to play for Tunis Temple in 1977, then Potentate William Sparks and have held the position of Potentate’s Temple Piper ever since, having been piper for 40 Potentates (missed playing for our 1st Potentate John Diefenbaker)

Piped for 2 Imperial Potentates, Edward McMartin in Montreal in 1990 and Gary Dunwoody in Washington, 2005.

Travelled with Illustrious Sir Perry McConnell, along with the Legion of Honour, to Arlington Cemetery in Washington, DC, piped at a ceremony at the Canadian Cenotaph there and later that evening, at a lavish dinner held for the occasion.

Visited both Ziyara Temple in Utica N.Y. and Mecca Temple in New York, N.Y., where I piped at their ceremonials.

Have been the guest piper to Media Temple, Watertown, N.Y. ‘s annual ceremonial for the past 38 years.

Played with Karnak Temple, Montreal, QC’s pipe band for a season and competed with them at the pipe band competition held at the Imperial Session in Toronto, ON in 1990

When Tunis Temple formed its Colour Party in 1979, I was one of the original members of the group and its piper.

Piped for Tunis Temple’s Legion of Honour at many of their ceremonies at the Tomb of the Unknown Soldier.

Currently the piper for Highland Lodge #418 in Maxville, ON, playing for the opening and closing of Lodge, and in their degree work.

Have been District Piper for Eastern District the last number of years, and will continue to fulfil this role when possible.

Have piped in every Lodge in Eastern District

One of my greatest honours in piping was playing for Most Worshipful Brother Don Mumby in my Mother Lodge #196 Madawaska Lodge in Arnprior, ON. It was my 1st time playing for a Grand Master.

I am proud to be a mason for the past 56 years.